For updates on Concerts and tours click here: Dates 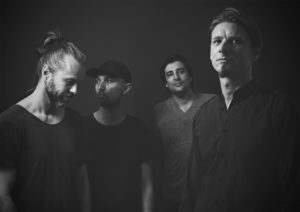 This local-international collaboration brings together four multi-instrumentalists – an innovative lead guitarist, a melody-driven bassist and two intuitive, dexterous percussionists whose instruments range from Arabic to Indian and North African.

Each band member brings with him a distinct sound, an impressive performance history and international experience. The quartet comprises:

Reza Khota (SA) guitar
An admirer of John McLaughlin and John Schofield, Reza’s strings produce a crossover between east and west, with influences of jazz and classical. He’s worked with SA’s finest musicians, among them Kesivan Naidoo, Shane Cooper and Buddy Wells, and recently taught masterclasses at the University of Toronto.

Schalk Joubert (SA) bass
One of SA’s busiest session musicians, Schalk is a product of his cultural heritage. He’s able to articulate South African melodies, West African grooves and harmony in the European tradition to produce a cohesive, melodic sound. He’s performed, produced and recorded with the likes of David Kramer, Nico Carstens and Michelle Shocked.

Ronan Skillen (Ireland) tabla, hybrid percussion kit, didgeridoo
Ronan is inspired by the aesthetic of record label ECM, and music from Mali to Memphis and Mumbai. His flair for improvisation began with the didgeridoo, and his later schooling in Indian classical music and wide palette of textural percussive sounds combine to create a rich soundscape. He’s toured with Rodriguez and Johnny Clegg, and performed with Manu Dibango among others.

Ancient Agents invite you on a musical journey that bridges cultures, combining grooves from north India and the Middle East with Afro beats and polyrhythms – ancient sounds telling a modern tale.

Join us for a night of music and stories as we pay tribute and respect to the legend that is Dave Ledbetter.

There will be a host of musicians featured on the night: